Crawl space encapsulation systems are designed to extend the envelope of your home from the home’s subfloor to the floor and foundation wall of the crawl space. The encapsulation makes it so the crawl space is no longer impacted by the weather, but controlled and regulated to maintain conditions comparable to the inside environment.

Building materials and designs have changed over the years; some of these changes have amplified the moisture issues in crawl spaces.

Condensation begins when the surface temperature of a material falls below the dew point.  For a majority of the year in the southeast, the average dew point is higher than the surface temperature of ductwork.  Vented crawl spaces in the southeast with ductwork in them will consistently have condensation issues on and around the ducts.  The only way to prevent this is to encapsulate the crawl space, which lowers the dew point and prevents condensation.

The combination of the building industry using a softer, more absorbent wood for framing along with ductwork being installed in the crawl space has ushered in the need for crawl space encapsulations in many homes found in the southeast.

Advanced Energy, out of North Carolina, did a case study comparing vented crawl space and encapsulated crawl spaces. The results of those case studies can be reviewed at www.advancedenergy.org 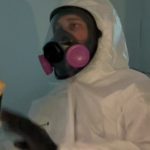 Monsters in the Crawl Space? 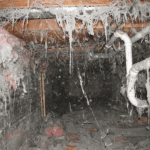